Ilfracombe Holy Trinity Graveyard Group is a community based self-funded group, open to people of all ages & abilities, looking after some 2,500 graves. When they started work in 2014 the graveyard had been left to its own devices for almost 4 years. They cleared the area of brambles, nettles & intrusive weeds & to encourage wildlife installed a hedgehog box, 6 bird boxes & a bug hotel!

The group has continued to meet in the graveyard every Saturday with members popping in most weeks for watering & gardening. Most of the work over the past year has been focused on grass-cutting, pruning & general tidying. Plants put in over the years are popping up all over the place & keeping the graveyard ablaze with colour & interest and they continue to add more. A neighbouring family has taken over the vegetable patch & the raised herb bed is looking healthy & visitors continue to help themselves. 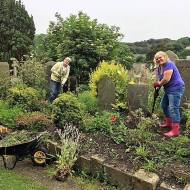 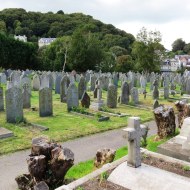 In May 2017, three members of the group, the maximum number allowed, were lucky enough to attend a conference atBuckfast Abbey, “Living Churchyards: Managing God’s Acre” hosted by the Exeter Diocese Living Churchyards Project with speakers, workshops and walks www.facebook.com/ilfracombeholytrinitygraveyard

Community Resources (Devon) CIC is a non profit company set up to provide meaningful activities for adults with learning disabilities. Their activities involve community work for local groups & others as well as commercial environmental work for local businesses. They have their own allotment, which is also accessed by other groups with learning disabilities. In 2017 they received a ‘Green Can Award’ from the Alupro ‘ Every Can Counts’ campaign.

During the past year they made progress with the Sensory Garden in Bicclescombe Park forming a sea glass sculpture as well as introducing other elements to the garden for sight, smell and touch, includeing, coloured planters, a willow structure, a totem pole and plants to provide smells as well as colour & feel. The work at the park continues on the herb garden & mill garden beds, they have also carried out other work at the park such as painting bench seats, leaf clearance, planting etc. 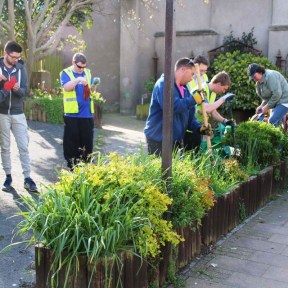 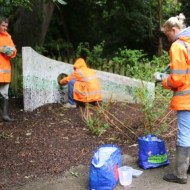 They have also continued their relationship with Ilfracombe in Bloom involving clearance work around the town such as weeding & cutting back of hedgerows, growing plants & being part of the Plant Sale days. This year has included removal of existing & replacement of timber log beds at Wilder Road car park & refurbishing our stanchions.

The Cairn Pleasure Ground & Old Railway is an historic woodland and grassland area of about 15 acres, standing approximately 520ft above sea level on the southern outskirts of Ilfracombe with a variety of paths winding their way through the site. In April 2015 it was given Nature Reservation status.

It is looked after by a local group of volunteers, Cairn Conservation Carers, supported by North Devon Council. The group meets every two weeks (weather permitting) & spends the morning on a range of tasks including tree planting, path improvements, meadow management & scrub clearance

They have recently treated some of the seats to keep them in good repair for the future, rebuilt a footpath & replaced some old steps.

Cow Green Community Garden was the first of the community gardens, created in 2002 with the help of many volunteers. The paths, huge water tanks & railings were installed & over 100 woodland trees & willows were donated & planted in the woodland area.

Over the past year volunteer numbers have increased by a third, a Facebook page has been set up to inform the local community about the garden & encourage more involvement. To raise funds they are planning to sell chutney made using produce from the garden. 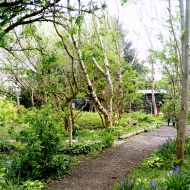 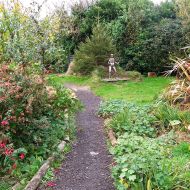 The ponds have been relined and the area replanted and frogs, toads and numerous insects now thrive in the area.  Composting has increased with the donation of a new compost bin made from 100% re-cycled plastic. Water butts have been repositioned and repaired so water is now available all year round. They took part in the annual RSPB garden survey.

Laston Green began in 2010 when a local group with the help of the college & other volunteers cleared the land but unfortunately due to the death of one of the main leaders was ‘unloved’ for a couple of years. In 2014 work began again & last year they had a wonderful harvest from with the polytunnel bursting at the seams & outside potatoes, beetroot, carrots & enough kale to see them right through winter. They added more raised beds & completed the potager area with bark chippings. Other projects saw a third tap provided to help ease watering trips, a mini digger driver helped to start on a hard standing area by the entrance gate and new signage provided.

Little Green Fingers was established to immerse young children in opportunities for outdoor play, discovery & enquiry skills as well as food education. As the majority are under two, the primary focus has been learning through play. They have had the opportunity to role play in the mud kitchen, “work” on the raised bed “building site” with diggers & dumper trucks & play gardener, watering all the plants & having a good old dig for worms in the empty beds.