Local Environmental Quality – Ilfracombe in Bloom works along with other groups including local Councillors, Street Reps, Greener Ilfracombe & the Town Council to clear weeds & litter from the streets.  Further to the setting up of the Green Team in 2016 it became apparent to the Town Council that a dedicated resource was required to complete this work all year round. Consequently, they have employed a Town Maintenance Operative, he will be kept busy cleaning pavements & keeping them clear of weeds, grass cutting & strimming, pruning & cutting back shrub beds & vegetation, keeping drains clear, repairing minor pot holes & maintaining & repairing street furniture. 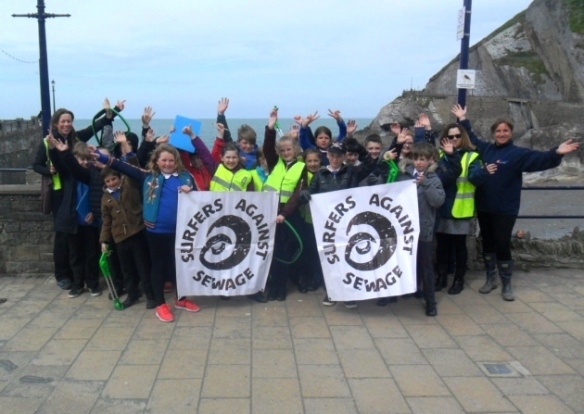 Each year a town wide spring clean is organised by the Town council with volunteers taking part including the schools & there are regular beach cleans through the summer months.

2015 saw the arrival of a new group – The Old Gits Club. Instigated by a Town Councillor a group of retired gents are doing minor repair jobs around the town and painting street furniture. 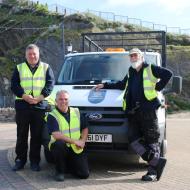 Car Parks – Wilder Road car park planting is looked after by one of our volunteers. Most of the other main car parks are in more exposed areas, planted with large shrubs & are maintained by North Devon Council. The planters & boat in Broad Street have been incorporated into the new town car park with a herb garden created for local residents alongside a strip of garden they have planted & maintain. 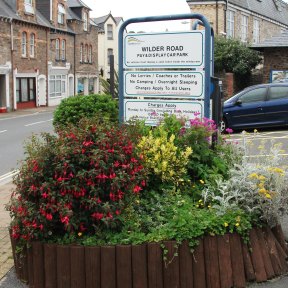 Local Heritage – The last few years has seen improvements to the public realm in Ilfracombe, although there is still work to be done. A new arch was erected at the top of Fore Street to entice people down to the harbour area, a new town logo was created & banners made & erected on lamp posts throughout the town for the summer months, using the ‘curious coastal charm’ theme.

Artwork can be found in various places around the town. 2012 saw the arrival of the Damien Hirst statue ‘Verity’ which he has loaned to the town for 20 years. The statue, of a woman holding aloft a sword & standing on a base of legal books is meant to be a ‘modern allegory of truth & justice’. We have also recently seen the opening of several small galleries in the town.

By the Landmark is a mosaic noting the achievements of Jonathon Edwards, Olympic Gold medal winner & World Record Triple jump holder, who lived in the town from 1976 to 1987 when his father was the vicar of St Philip & St James. He returned in 2012 & carried the Olympic torch for part of it’s route through the town, meeting up with children from the infant & junior schools.

There are stainless steel people by Bob Walters, a local artist, in the garden at the bottom of Northfield Road & in the courtyard to the Lantern Community Centre in the High Street. 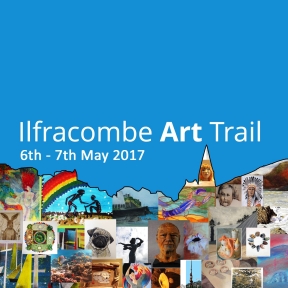 In July 2013 we had the first IlfraExpo of art around the town, some just here for a month but others still remain & an annual Art Trail each May with over 50 artists taking part, this year including Ilfracombe in Bloom workshops.

Signage – The old dull maps in the car parks have all been replaced & having received funding from AONB there are also eight interpretation boards on the South West Coast path through the town depicting the town’s history, marine & bird life as well as harbour activities & in addition there is one at Hele & one at Lee, so covering the three wards of Ilfracombe. 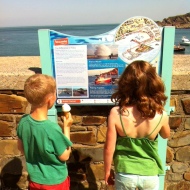 In 2013 with funding from the Marine & Maritime Organisation the Fish Trail  – a series of 8 interpretation boards – was erected around the harbour telling the history of this area of the town and the fishing industry.